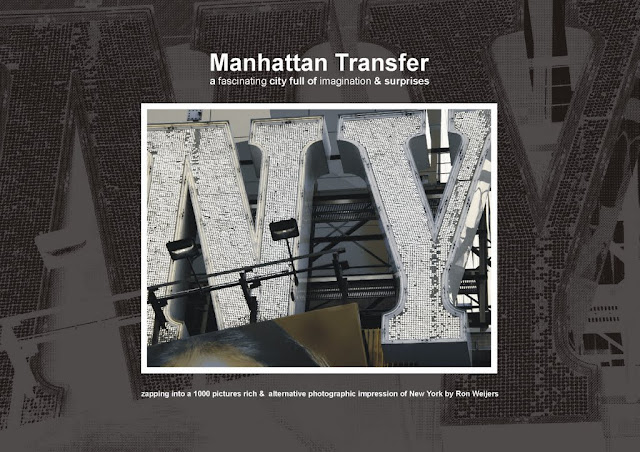 .
Manhattan Transfer, a publication developed by Ron Weijers during 2006 after a 7 month lasting photographic session in Manhattan, New York. An alternative view on the Big Apple with a selection of 1000 pictures.
IntroductionThe wealth of the world has a New York address. Legions of artists, philosophers, businessman, poets, writers, musicians, industrialists, brokers, movie stars, advertising executives and more, from all over the world created (and still do so) this microcosm of all that New York has become. Its the story of a great fascinating city and perhaps nowhere else in this world is the essence of being alive more evident than in New York. A screeching amusement park without a roller coaster. This metaphor was used in more ways than one, for New York’s 24-hour figurative playground. The ultimate place to recharge your batteries on all the levels of your imagination. New York is one of the few places in the world where one can watch the night sky lighten and break into streaks of rose that suddenly saturate the heavens, then burst with sunlight that ignites sidewalks and streets that has not been stolen by high and indescribably ugly buildings. It piles up in buildings on land that is laced with gold.
The images evoked by New York are all tough, aggressive, gritty though alive:
tall contentious skyscrapers piercing the sky; cavernous concrete streets thick with traffic; saturating lights; cabbies making wisecracks out of the sides of their mouths; pedestrians of all colors, races and social stations elbowing their ways through the teeming mass. Yet despite its stark realities, New York is one of the most romantic cities in the world. Although it has never possessed the romance of Paris, it has always exuded the thrill of power, money, ambition, and success. For all New Yorkers, from financiers to actresses, from advertising executives to mobsters, the Big Apple, as it is sometimes called, is the ultimate locale for the American dreamer. New York City is the largest city in the United States, and has been for almost two hundred years since shortly after birth of the nation. But size is not its only claim to prominence. It is also the nation’s, and perhaps the world’s, nucleus for business, trade, finance, publishing, communications, theater, music, and art. Like London, Paris, or Hong Kong, New York is a world capital and not simply the supreme American city.From its inception, New York has been rocked with troubles over population, unbearable traffic, crime, racial and ethnic conflict, pollution, filth, drugs, and an inordinately high cost of living. But it remains the greatest of American Dreams, not the City of Light, but the City of Life.
.
.