While developing the enVisual Dialogue body of work in the beginning of 2015, Weijers enabled himself to reinvent his artistic process. In a continuous need to disconnect from and to question the existing on the one hand and to discover new perspectives on the other, Weijers developed a series of game-changing works of art. The perception of the bigger picture on developing art for the stimulation and improvement of the overall discussion and inspired by pure optimism, Weijers developed his own personal lexicon of tendencies, techniques, and tenets that inspired and stimulated his conception of art as a channel for self-expression and spontaneity in the course of the development of his current works of contemporary art. Challenging furthermore the conventional traditions of painting, the enVisual Dialogue body of work is in its reliance on material, process, and a spirit of innovation, to question storied conceptions of art-making and the contemporaneous cultural climate. 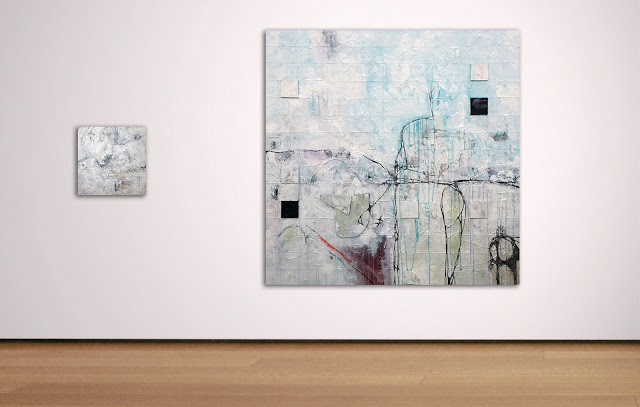 Weijers devoted his work exclusively to pursuing colour and form within surface and space as well as the use of light and transparancy within this project and researched into the transformation of the materials following a differing approach of shaping objects with a wide variety of mainly unconventional materials in order the endeepen his understanding and horizon on the use of conventional forms of collage with the aim of recreating and imagining objects and paintings that transfer symbolic values of consciency and morality as well as square minded and black&white thinking patterns in order to provide the basic visual impuls to revive dialogue. A process that necessitates a certain hermeticism. This categorical, occasionally autistic character of his work as a painter, requires that he seeks out and finds a direct engagement with so-called reality in other fields. Weijers is eminently political and intellectually engaged, as well as a reflective individual, who for precisely this reason keeps his work as an artist free from avowals and metaphors. The work itself is enough of a metaphor and proclamation.
It seems as if his paintings have been formed by means of multi-layered alternating applications of paint, by scraping paint off, adding materials and grinding the surfaces. The melancholy inherent to these pictures emerges only every once in a while, when the eye perceives the interplay between the skilfully composed cold and warm transmitted translucent coloured hues. The viewer is regularly transported into expansive diffused scapes while interacting with a minimal amount of conceptual clues and in which almost nothing is obvious. As far as the content of the artist’s work is concerned, it is man who is the focus of his attention and his central idea, while the art form excels in his most direct and primary reflections transformed into drawing. His calligraphically elaborated, fluid, refined, mature and determined line winds to end up forming an originally modified structure of a human figure, reduced mostly to a head, which is an indispensable and distinctive attribute of Weijers's artistic opus. It is the most meaningful element with which the artist visualises a reasonable reflecting but also sensitive man, as is revealed by soft, but taut forms. The characteristic continuous lines, tiny and precise graphisms represent the artist's variable artistic interactions with the painting surface and confirm his personal penchant for simplification of form that definitely encompasses the complexity of an invisible, but ongoing activity within a person's inner self; his changing thoughts, a kaleidoscope of his emotional states of mind and social feelings which fully objectify the elaboration of a human figure through the author's subjective, but also generally argumented imaginary world. 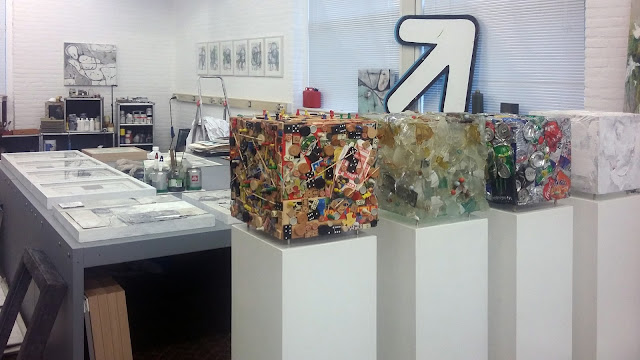 Weijers evidently and intriguingly considered interactions of light and space in this divergent series of works, cubistic shaped constructions from scattered pieces of glass and porcelain are representative of his conceptual investigations. These mesmerizing, layered compilations of a large variety of unconventional materials, broken into pieces and applied over a cubistic composition, challenge the viewer’s perception. These works appear to capture a force behind the conceptual eager to break through its surface and test its constitution. Weijers covered these objects with semi-transaparant resin forms that seem to vibrate under their crumpled up and destroyed fuzzy monochromatic surfaces. The French artist Marcel Duchamp was the first to submit a work titled “Fountain" to a 1917 exhibition, as a legitimate work of art that incited outrage. It was dismissed as rubbish and cut from the exhibition. Nowadays, the artworld refers to “Fountain” as a major landmark in 20th-century art, and replicas of his porcelain  (urinal) throne grace important museums around the world. Seeing the beauty in Duchamp’s work requires thumbing one’s nose at established ideas about art, whereas the artist has deliberately manipulated junk to make it beautiful. There’s nothing special about these works, but in the hands of the artist, it becomes compelling. Many people associate environmentalism with gloom-and-doom predictions about the planet. While climate change is a serious issue, many artists, architects and other designers are also working on smaller scale green projects that both effect the environment and cause change by sparking discussion and reflection. While the actual direct impact of any given artwork or design may be small the cumulative result of their efforts is palpable and grows bigger with each creative and sustainable design or art project. The enVisual Dialogue series of works are an obvious commentary on consumerism and waste, a theme that is not new, any more than is the concept of found-object art. But Weijers, is one of a new generation of artists, tackling the subject. We've all heard that "one man's trash is another mans treasure". That saying takes on a new meaning when we view the world through the eyes of the artist. The essence at the heart of the enVisual Dialogue series can just as easily cut both ways: Is trash turned into art still worthless? Does it become art because the artist deems it so? Duchamp would say yes.

All objects within the 2015 enVisual Dialogue project, are made of collected and discarded goods found in the trash. The works are beautifully constructed with care, even if a closer look reveals its low-cost origins. Some of the objects where once so shiny, new and easy to acquire, and yet at the same time, so persistent and disruptive. There’s a defiant duality of form and materials at play here. Many of the works within the enVisual Dialogue series  are intricate and almost delicate and one could review them as a series objects expressing the suggestion to take a stand and face the reality and responsibility in life, guiding deeper into a moral message on a more personal and individual level and interacting on this point with the conscious of the viewer. A mirror called self-reflection if one would want. By painting over the objects variety of collage constructions and underlayers partly with lucent acrylic white Weijers emphasizes the suggestive character of this under-layer but simultaneously unveils the hollow promise which lurks behind the pretty surface. Diversion methods as those from a stage magician or illusionist, direct the public attention to a particular statement or point, while in the mean time the real deal is out in the open but ignored. On the one hand, the works within the enVisual Dialogue series are nearly all beautifully executed and visually stimulating. On the other hand, an undercurrent of environmentalist self-awareness undercuts subtler points the artist could add to the conversation.

In a continuous need to disconnect from and to question the existing on the one hand and to discover new perspectives on the other, Weijers is one of those artists constantly questioning the techniques they use, their meanings, their goals, all the while perfectly aware they shall never be any definite answer and that their work is meant to remain empirical. He’s not an abstract painter using figuration but a figurative painter who is producing abstraction.

Weijers explores the ideas of transformation and contradiction. The process of making the work is fundamental to developing a visual language through which he can communicate the feeling of experience to the viewer. His works define and redefine the meanings of process and transformation. Bringing elements of chaos and dissonance into a state of harmony, each work matures into a fully realized presence.

During the process of making his works, Weijers re-constructs and re-activates his materials and likens his work to that of building a relationship: a series of attempts at intimacy with the work, of fallen expectations, of failures and finally, of surrender. It is in the suspended spaces between the swaying of depicted figuration and abstraction, that his worlds take shape. His work acts as a rhythm of color, of possibility, of realization and as a sorting structure through which the artist makes harmonies within the chaos around him. Weijers translates his creativity and visions into multi-layered works of art that reflect a characteristic abstract language of signs and shapes. Within his works he reveals a deeper meaning and reflects his view on contemporary issues. By reaching a state of liberation from existing patterns, the interplay of lines is dominated by the metamorphosis which conceals the evaluation of his work from the source. The spectator's fantasy is stimulated by the intuitive and specific combination of color, material and shape, thus seducing the spectator towards an alternative view on this world.