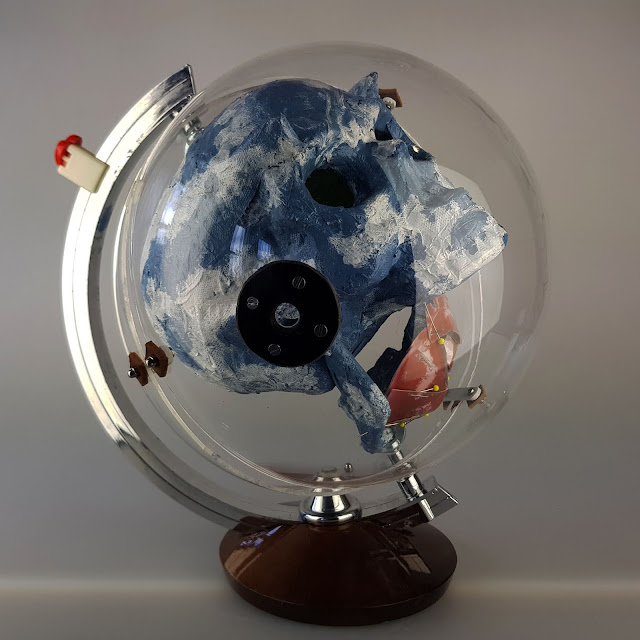 The air we breathe, the Devil, Love, and the skull. I made this work because the phenomenon of death has haunted me since early age. Though I felt it strongly, I have never wanted to see or accept the dark side of it. And so, during life, I found a way with it. And depicted that outcome in this skull. Death to fear or to accept blindly with no fear. As new life is celebrated with a birth as here on earth and must be lived in growth, transience and finally parting from life on this planet by death. I have faith all life comes and goes wherever it must go or must be, coming and going through the love gate. That is in my belief, in the careful heart, mind and soul of this Cloudy Devil called Planet-Skull. 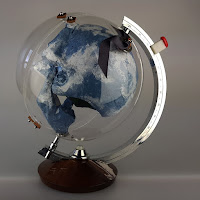 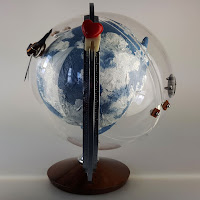 The Making of “Cloudy Devil called Planet-Skull”. In the beginning I had the plan to use this illustration underneath, it was meant to become painted inside the skull. As if the Universe outside is always on the diorama-mind of it. This “LoveGate” was meant to be seen through lenses, placed in the eyes of the skull. Like reading its Universal mind through its eyes. Then I decided to simplify my idea and left the idea of the diorama mind, the little (star-)lights, and the lenses and decided to concentrate on what’s Living Outside the skull. A new idea occurred and developed into the object as it is now. Over life, death, and people, which seem to want to be in control. The questions which we will not get answers to, such as, in this case, “What happens to us after death?” seems to have acquired an important role throughout (religious)-history. Speaking about the devil now the skull is here... Uncertainty over never to be answered life questions, and those of death, is through history in a lot of circumstances used in the metaphor of the Devil: evil. Death then is personified and emphasized as a phenomenon to be feared. When we remain in uncertainty without answers, the power of fear for uncertainty can be misused and is symbolized by what remains here after life: bones and skull defined as dirty and evil for what is bad: death. Apparently by the metaphor, that is what death, and the Devil looks like most of the time, bones, and skull.

My version of the skull is pinned a big heart between its jaws. This Devil with its skin of cloudy blue sky, is worked out as a globe. A Devilskull-planet in its bubble. Who screams its heart out into its bubble in despair, not wanting to be or to be seen as its Royal Frightening Deadly Badness anymore? Does the Devil scream out loud 'Love', in its bigger fear for human race, being more fearful for us then we are for the Devil (read as, evil) here? The blue sky and clouds are the vulnerable thin skin of the Devil's skull. And by this cloudy skin and protected by this bubble which easily can be destroyed or breached into as well is protecting it? Or are we, as spectators, by that skin and bubble, protected against this Devil's fear and agony...? and is that protection needed for us... or do we really have to make change in perception over fear for anything unknown? And get healed by letting go our hunger for control...

Artistical influence, “The Cookery Club” In this skull there is significant influence of the artist trio; Sander Dikstra, (Marijn van der Waa) and Liz Chute. They were active in the past under the name “The Cookery Club” and made food art in the form of real life anatomic human body parts, copied as realistic as possible by them in driven sugar. Their vision was, amongst others, to make transient art. As the body is transient, life is and everything is. That idea still appeals to me, and the idea is not bad I suppose. The heart between the jaws of my skull is a print on a postcard of a work made by “The Cookery Club”. 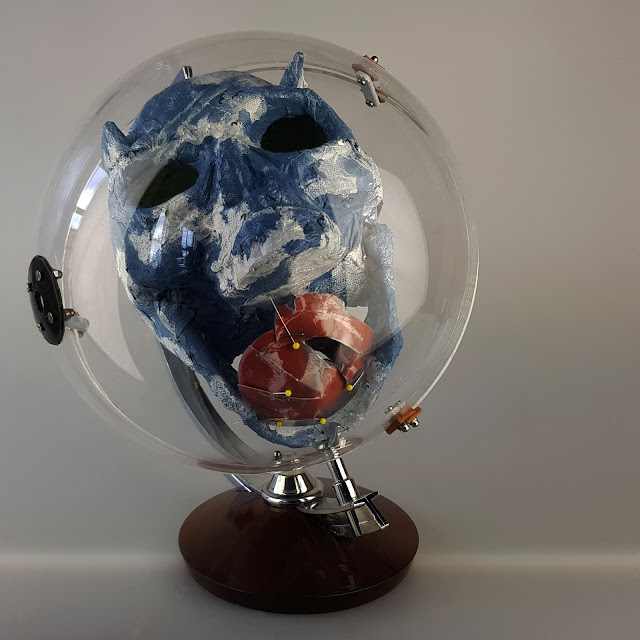 Grietje and her intuitive-realistic-Art. Later, in life Grietje became active as a working artist, so to say. Before that decision she tried a lot of jobs other than in art. Nothing worked for her and neither for society. She was always trying to escape what had to be: becoming the Art Brut artist that she is working on to become now. She developed her own style by using the brain as the steering function to her working hands, the heart she trusts blindly, there comes her ideas from, and she never knows where that is heading for. Her hands are her tools to make her unknown dreams in the heart come true, just only technically leaded by the brain. In that way, she tries to find her way. With as a red line collages and assemblages of her own work which she, reworks again and makes collages of again. In every 2D and 3D work she finds her challenge in using other materials and techniques than the work she made before. Grietje doesn't study techniques or possibilities of materials, tools or colour to keep her finding solutions and results authenticaly hers.

In one way or the other in the end there are always humoristic, funny notes to find in her creations, in an intuïtive way she comes out with a positive touch.