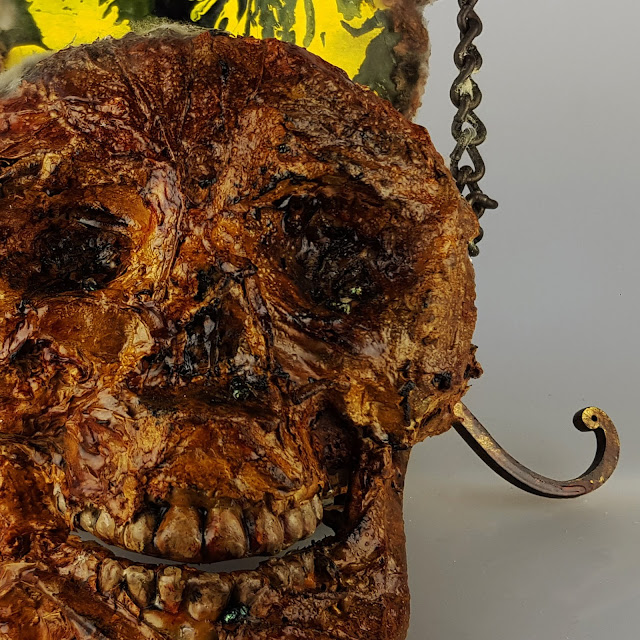 I am re-discovering the magic of oil painting since I left oils for acrylics around the year 2000.  I work mostly these past few years with water-based oils and collage, sometimes enamel pours, with the collage including all mediums, including former scraps of previous paintings, and even some of my early kid drawings. My work can be described as a blend of surrealism, phantasmagoria, horror, as well as whimsy. I am forever trying to surprise myself, and collage has a way of radically changing a piece both visually and symbolically with each addition or subtraction, to which I respond with paint in an instinctive and improvisational manner. Each painting is an event, a dialogue happening, a relationship forming, and it will unfold before my eyes, and preserved in it's resolution. It is very important for me to honor that time-honored approach to art of getting out of one's way, and letting the painting paint itself. I truly believe that in surrendering one's self (no matter what the practice) to the moment as it unfolds, one can experience what can only be described as "magical." It is for this reason that I aspire to allow for imperfections, flaws, and sometimes jolting features, as a part of the raw, fresh, direct transmission of whatever the piece is trying to "communicate." For each piece does indeed have it's own kind of language, it's own set of unspoken rules, and the more I can facilitate the birth of this new "creature," and hear what it has to say, the better, even if it comes at the expense of seamlessness, flawlessness, or some other illusion of surface continuity. This is the nature of collage art, generally speaking, and that there are several layers of disjointed dimensions all playing together on a flat surface. I enjoy the push/pull relationship of color, texture, value, and mediums, and feel there are many layers all working together, often behind the scenes, so to speak. 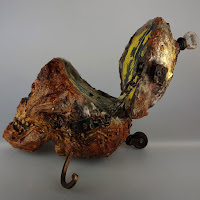 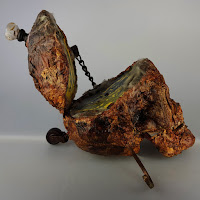 My participation in the Get Out of Your Skull project has been a bit of a departure from my usual two-dimensional work, since the skull is very much a three dimensional object, however, I approached the surface of the piece in the same way I do in any painting, with heavy emphasis on texture, and contrasts. The outside of the skull is heavily textured using paper mache, and monochromatic to give it a natural, earthy feel, as if it were excavated, rather than painted. The inside is quite the opposite, with a vibrantly colored, glossy surface using poured enamel. The piece includes some rather quirky elements that I found from an antique builder supply store that serve two functions, the first being pragmatic as they help to stabilize the skull when the cap is lifted. Secondly these appropriated elements give the piece a bit of a whimsical feel, reminding the viewer that the skull is indeed not an artifact but a sculpted art object, which I think helps diminish the otherwise morbid appearance.   And as far as morbidity goes, the topic of death has been a fascinating journey over these last few months of being involved in this project, especially seeing and hearing from other members, many of whom are also GAP members. I feel like since death is the one sure thing we all can relate to, binding us in some mysterious and yet, potentially dreadful way, it forces us to share some of our more protected vulnerabilities, and creating a comradery of sorts. I feel like I'm part of a Skull family or tribe now, like we all had to die a little in making our skulls, and now we are born anew! It's like this lifeless, uniform symbol of death has been infused with life and creativity, with each one being uniquely expressive in our across-the-globe vantage points. Much thanks to Ron Weijers with 10dence Gallery for curating and manifesting this profound and fun exhibition. 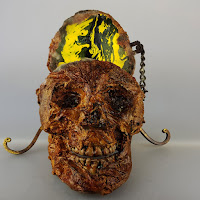 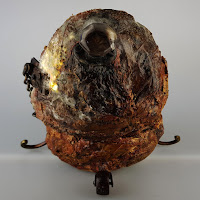 I graduated with a Bachelor's degree in Fine Art at William and Mary in 1993. My focus was in oil painting, which I continued to explore when I moved to 111 First Street in JerseyCity, New Jersey in the summer of '93. "One Eleven," as it was affectionately called, was home to maybe up to a hundred artists all living and working in their studios and exhibiting in various gallery spaces both within the building as well as the art community of Jersey City. After living in New Jersey and apprenticing for a time with the artist Bill Barrell (of the NYC Rhino Horn group from the 1970's), I got a job at Christie's Auction house in New York City where I was handling a lot of contemporary art, as well as pop cultural props, and hanging a lot of art shows. I was continuing to paint on my own at the time, taking a few more classes at the New York Studio School (got to take a class taught by Robert Beauchamp before he died!) and during that time my father opened up a gallery in Omaha, Nebraska called Lakin Jones Gallery. Since my father was having some success selling artwork from local Omaha artists as well as some of the members of the aforementioned Rhino Horn group, he then began selling my work as well, and it wasn't very long before he convinced me to move to Omaha in '97 where I've been living on and off ever since, showing art in various galleries around town as well as participating in a few select shows across the country and also including the Crossing Borders exhibition in the Netherlands in 2019 and the Fragmentos exhibition in Spain last year. The opportunities to show outside of Omaha have been presented to me through my joining of the international art group (consisting of roughly 60 members) called GAP, or Global Art Project in 2019. While my father's gallery no longer exists, in 2020 I partnered with another artist, Trudy Swanson, to run our own gallery called Benson Art Gallery in a little artsy pocket of Omaha called Benson. There I show my work regularly as well as feature other local artists every month. 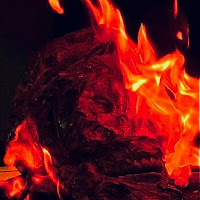